You are using an outdated browser. Please upgrade your browser to improve your experience.
by Tommy Ly
March 28, 2012
Pairing iDevices with robotics is always a good thing, and the Galileo is proof of that. It's nearly doubled its $100,000 goal on Kickstarter and still has about three weeks left until being funded. Designed by Motrr, the Galileo is a robotic platform for iPhone 4/4S and iPod touch (fourth generation) with infinite spherical rotation capabilities. You just dock your iPhone or iPod touch, then you can control the pan and tilt of the Galileo using an iPhone 4/4S, iPad 2, new iPad, or the latest iPod touch. This means you can use the Galileo for panning time-lapses, monitoring your baby, or just keeping track of restless children during a video call.

If you can't see the video above, please click here. Some of the Galileo's other features include: The Motrr team states that they are currently working with several app developers for launch, and that current in-house launch apps currently support face and motion-tracking modes. It will be interesting to see what developers will come up with using the Galileo's SDK. Until then, we'll just have to wait and see. For more information, visit Kickstarter. A pledge of $85 will get you your own Galileo. What are some of the ways you would use it? 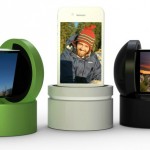 The Galileo Is A Great Demonstration Of iOS Powered Robotics

The Galileo Is A Great Demonstration Of iOS Powered Robotics
Nothing found :(
Try something else