You are using an outdated browser. Please upgrade your browser to improve your experience.
by Bryan M. Wolfe
March 7, 2012
It’s crunch time as Apple’s special iPad event is just minutes away. Now, a new Apple rumor has gotten the blogosphere very excited that we thought we’d pass along too. Along with a Retina display, the new iPad could include something called touch-feedback technology, according to the folks at TNW. Accordingly, the new iDevice could include haptics, a tactile feedback technology that responds to normal vibrations in mobile devices, to provide feedback through your sense of touch. This technology is significant in that it wouldn’t require “modification of the screen’s surface, nor does it use moving parts.” In addition, it should be noted that Apple’s invitation to today’s event ends with this cryptic message: “We have something you really have to see. And touch.” One company that makes this technology is Senseg, which just happened to demo it in Cupertino, California in January. Charles Arthur of The Guardian is also on this story and provides this amazing quote:

Apple is famously secretive about which companies it is using for its new products; in the past it has cut companies out of announcements when they have leaked information ahead of time, making those involved especially paranoid about speaking out of turn. But asked this week whether Apple is a customer for the E-Sense technology, Petri Jehkonen, Senseg’s technical marketing manager, declined to comment. Asked whether Apple is not a customer, he replied: “That would be for Apple to say. My comment is no comment.”

Take a look: It will be interesting to see if the iPad 3 will include this game-changing technology. We will find out soon. Very soon. Is this news enough to get you excited about the next iPad? 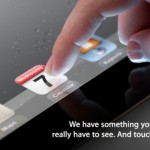 The Last (And Newest) iPad 3 Rumor Is A Biggie

The Last (And Newest) iPad 3 Rumor Is A Biggie
Nothing found :(
Try something else