You are using an outdated browser. Please upgrade your browser to improve your experience.
by Bryan M. Wolfe
March 19, 2012
One of the key features of the new iPad is Dictation, a Siri-lite application that turns voice to text. However, before you begin using Dictation, you should first consider what it means to your privacy, according to ZDNet. When Tim Cook announced the new iPad on March 7, much of the focus was on the tablet’s new Retina display and A5X processor. In addition, many mentioned the new iPad didn’t include Siri, Apple’s voice recognition software available exclusively on the iPhone 4S. Less publicized was Dictation, a feature where “talking is the new typing.”

Unfortunately, Dictation requires a Wi-Fi connection in most instances, which could open Apple up to privacy concerns. In this case, Apple’s reason for requiring a connection to activate voice-to-text is vague and confusing. For example, the first time you attempt to enable Dictation, you're presented with the following dialogue: 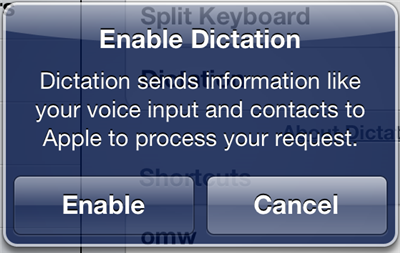 “Information like” is so vague and facile, is it not? Anyway, I thought to myself, “If this is true, then I wonder what happens if I have Dictation enabled but Wi-Fi disabled.” Lo and behold, the Dictation key next to the space bar completely disappears. Dictation is fully disabled and non-functional if you aren’t connected to the Internet.

Stranger still, is this message that arrives when you want to disable the application: 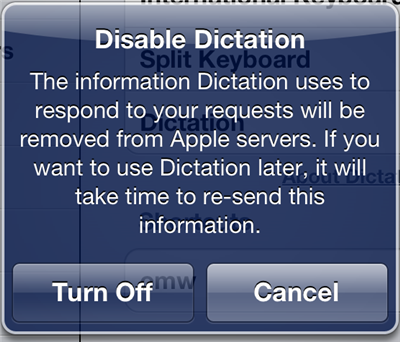 Exactly what does “removed from Apple servers,” mean? For this, you could review Apple’s About Dictation and Privacy policy. Unfortunately, this document is full of verbiage that makes Apple's position even less clear.  It reads:

[T]he things you dictate will be recorded and sent to Apple to convert what you say into text. Your device will also send Apple other information, such as your first name and nickname; the names, nicknames, and relationship with you (e.g., “my dad”) of your address book contacts; and song names in your collection (collectively, your “User Data”). All of this data is used to help the dictation feature understand you better and recognize what you say. It is not linked to other data that Apple may have from your use of other Apple services. … If you turn off Dictation, Apple will delete your User Data, as well as your recent voice input data. Older voice input data that has been disassociated from you may be retained for a period of time to generally improve Dictation and other Apple products and services. This voice input data may include audio files and transcripts of what you said and related diagnostic data, such as hardware and operating system specifications and performance statistics.

We, like ZDNet, have no clue why Apple needs our “User Data” simply for us to convert voice to text.  Instead, we are left with quite a bit of “vague verbiage.” In doing so, many might argue that until Apple clarifies its position, it may be best to disable Dictation. You can do so by: We thank ZDNet for uncovering this information. Hopefully, because of it, we'll be hearing more from Apple on why the company needs our data for us to use Dictation. What are your thoughts on Dictation and Apple’s use of “User Data?” Are you concerned with your privacy? 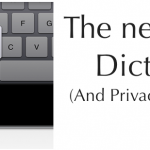 Why Does The New iPad’s Dictation Feature Require A Wi-Fi Connection?

Why Does The New iPad’s Dictation Feature Require A Wi-Fi Connection?
Nothing found :(
Try something else