You are using an outdated browser. Please upgrade your browser to improve your experience.
by A.T. Faust III
March 21, 2012
Aside from being the world's most valuable company and the industry's most popular and respected innovator, Apple's now set to reach another marketshare milestone. Sometime later this year, analysts are predicting that Apple will become the number one mobile processor company (by volume). Indeed, last year Apple finished second to Intel by shipping 176 million mobile processors in its iDevice lineup, accounting for 13.5 percent of the total market. Moving just five million units more was Intel, topping the same market at a 13.9 percent share. Of course, due to Apple's proclivity to report end-user purchases rather than mere vendor shipments, it's extremely likely that the Cupertino company is already tops worldwide (depending upon your definition of "sales.") But, according to Macworld, Intel's troubles are just beginning:

Earlier this week, Apple CEO Tim Cook said it was only a matter of time before the tablet market surpassed the PC market in size, citing research firm Gartner's projection of tablet shipments reaching 325 million by 2015. Apple serves a captive audience by using its A4, A5 and A5X mobile processors in its own devices, but that should worry Intel especially if Apple starts using its own processors in the MacBook Air laptop and other devices, [Jim McGregor, chief technology strategist at In-Stat] said.

So, as Apple becomes the dominant player in both mobile guts and mobile glory, competing brands will have to find new ways to deal with Apple's ever-expanding clout. To say it won't be easy is a dramatic understatement. 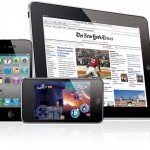 With In-House Chips Running Its iDevice Lineup, Apple Approaches Another Industry Milestone
Nothing found :(
Try something else