You are using an outdated browser. Please upgrade your browser to improve your experience.
by Bryan M. Wolfe
April 30, 2012
Steve Wozniak recently had some kind words to say about Windows Phone 7.5. The Apple co-founder stated Microsoft’s mobile product is better than Android, and most surprisingly, offers a better app experience than both Android and iOS, according to PC Magazine. In surprising comments recently made to A New Domain’s Dan Patterson, Gina Smith, and Todd Moore, Wozniak says Windows Phone 7 beats Android in terms of “looks and beauty.” So much so, he would recommend Microsoft’s product over Android. When speaking specifically of the new Nokia Lumia 900, which comes with Windows Phone 7, Wozniak states:

"I'm kind of shocked on every screen — much more beautiful than the same apps on Android and iPhone. “

Wozniak’s most glowing comment for Microsoft is when he stated:

"I also surmised that Steve Jobs might have been reincarnated at (Microsoft) due to a lot of what I see and feel with this phone making me think of a lot of great Apple things.”

As The New York Times recently noted, Microsoft has been underwriting developers’ costs for building Windows Phone apps. In other words, apps that would have cost developers $60,000 to $600,000 to create were 100 percent supported by Microsoft. Does this matter? Absolutely not. In fact, kudos to Microsoft for creating a mobile OS that received praise from an Apple co-founder. Perhaps Wozniak’s comments will cause Cupertino to rethink iOS 6.0 and make it even better than we know it will be. Finally, it’s worth noting that despite Wozniak’s comments, the “number-one phone in his geeky heart” remains the iPhone. Are you surprised by Wozniak's comments? 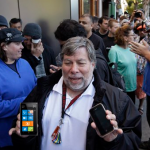