You are using an outdated browser. Please upgrade your browser to improve your experience.
by Dave LeClair
April 21, 2012
A company based out of Pennsylvania, called FlatWorld, has filed suit against Apple for their entire touch related product line. This patent infringement suit is targeting a major portion of Apple's business. The suit does not actually claim to have anything like Apple's multi-touch screens, but they are coming after Apple anyway. TouchWorld claims they "developed a testing tool with a touch screen programmed to allow children to directly manipulate or move objects on the screen, and 'hide' them behind other objects." This claim certainly sounds like a stretch. I suppose one could argue that this mechanic is similar to dragging an icon on the touch screen and hiding it in a folder, but it still does not seem similar enough for this lawsuit to be successful. This suit is going after the iPhone, iPad, iPod touch, iPod nano (sixth generation), MacBook Pro, MacBook Air, Magic Mouse in combination with any Mac computer running OSX Snow Leopard v10.6.1 or later, and the Magic Trackpad in combination with any Mac computer running OS X Snow Leopard v.10.6.4 or later. That is nearly Apple's entire product offering. According to Patently Apple, the claim is as follows:

A system for manipulating images comprising a screen upon which an image is displayed; and a computer coupled to the screen, the computer causing the images to be manipulated in response to location inputs from a pointing device, the system being characterized in that: when the image is being dragged in response to the location inputs and the system detects that the velocity with which the image is being dragged exceeds a threshold velocity, the system responds by removing the image from the display without leaving any representative thereof in the display.

I'm not a lawyer, so I can't speak to the potential for success of this suit, but I can promise that we will keep you posted as more develops. 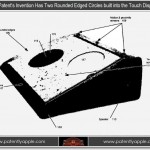 Apple Facing Lawsuit For Their Entire Library Of Touch Products

Apple Facing Lawsuit For Their Entire Library Of Touch Products
Nothing found :(
Try something else