You are using an outdated browser. Please upgrade your browser to improve your experience.
by Bryan M. Wolfe
April 17, 2012
Greenpeace, the non-profit environmental group, is targeting Apple over the type of energy the company uses to power its iCloud service. In a new report titled, “How Clean Is Your Cloud,” the group criticizes the Cupertino, California-based company for using “dirty” or nonrenewable energy, according to The New York Times. According to the report, many companies are moving their digital facilities to states that use coal and nuclear energy. These include North Carolina, Virginia, and Illinois. As such, Greenpeace says Apple is leading the “charge to coal-fired energy,” for using “dirty” energy to power its new Maiden, NC facility, where iCloud is primarily based. In comparison, Google and Facebook are singled out as providing better energy solutions, such as wind, solar energy, and hydroelectric power at their data facilities. Launched in 2011, iCloud allows customers to store data including music, photos, videos, and more.

However, Apple disagrees with the environmental group’s findings. Through a spokesman, the company contends that it consumes far less power at its North Carolina plant than Greenpeace has alleged, 20 million watts at full capacity, versus Greenpeace’s estimate of 100 million watts. In addition, Apple said the company is in the process of building two large projects intended to offset energy use in North Carolina: solar panels and a set of energy cells. According to Apple’s Kristin Huguet, fuel cells produce clean energy ranging from natural gas to “so-called biogas – for example, emissions from landfills.” In doing so, they will eventual supply a “substantial percentage of the electricity needed by the (NC) data center.” This isn’t the first time Greenpeace has accused Apple of hurting the environment. In 2003, Greenpeace complained that the technology giant included dangerous materials in many of its products, including PVC and BFRs. In 2007, the late Steve Jobs announced that those chemicals would no longer be used in his company’s products. For more information on Greenpeace’s report, please click here.   Personally, I feel Apple could do more to protect the environment. However, I also recognize the company must do so while also trying to please a customer base that is constantly looking to it for the next big thing in technology. Unfortunately, those two forces don't always mix, at least in the short-term. Apple's physical products are much more environmentally friendly than they once were. I expect Apple to do the same with its iCloud service in the future. Could Apple do more to protect the environment or are they just being targeted because of their success? 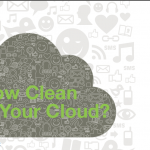 Apple’s iCloudy Service
Nothing found :(
Try something else