You are using an outdated browser. Please upgrade your browser to improve your experience.
by Bryan M. Wolfe
April 5, 2012
The long-rumored real Apple TV could arrive later this year and be called … the iPanel. This is the conclusion drawn from Jefferies analyst, Peter Misek, who studies Apple and other technology companies, according to AppleInsider. According to today’s report, the iPanel is to be released in the fourth quarter of this year (October-December) and be much more than a television.

Apple has long been expected to launch an actual TV. In fact, the late Apple CEO Steve Jobs essentially said as much in his authorized biography. Recently, it was suggested that Apple's finished product would be called the iTV. However, the name iTV is short for the British Network, Independent Television, which has been on the air since 1955. Hence, the reason the name iPanel comes into play. On first glance, iPanel sounds like a disastrous name for a product millions will likely buy whenever it arrives. Of course, many disliked the name iPad when Apple announced their first tablet in 2010, and that name stuck just fine. Beyond the “iPanel” name, Misek opines the set will have a $1,250 selling price and 30 percent gross margin. Production could begin as early as next month, with Misek seeing sales of between 2 million and 5 million before the end of the year. For what it's worth, the iPanel.com domain is currently owned by Marchex Sales, Inc. in Las Vegas, Nevada. Do you like the name "iPanel" or should Apple think of something more clever? 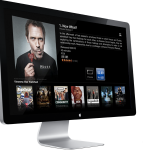 Apple's 'iPanel' To Include Display, Gaming Center And Much More

Apple's 'iPanel' To Include Display, Gaming Center And Much More
Nothing found :(
Try something else