You are using an outdated browser. Please upgrade your browser to improve your experience.
by Tommy Ly
April 19, 2012
Broken iPhone screens are all too common. As far as I can tell, they can take either a lot, or a little abuse before cracking. A few months ago, I dropped my iPhone 4S while on a bike ride. It hit the ground, rolled, bounced, and slid across the pavement. Somehow, the phone was fine other than a few scratches. Unfortuately, a friend of mine dropped his phone onto tile from less than five feet up, and spiderwebbed his whole screen. I can't tell you how my iPhone survived its fall, but with the screen protectors offered by Buff Labs, it looks like any iPhone can literally be tough as nails. These screen protectors are composed of four layers, the first of which being their "shock absorptive cushioning layer," which would absorb most of the energy from an impact, while any remaining energy would be dispersed by the protector's "shock dispersive cushioning layer." The remaining layers consist of a typical scratch resistant layer, and the last is an adhesive layer that allows the screen protector to be repositioned if you make a mistake while applying. Unlike other screen protectors, Buff Labs' is capable of getting out those pesky air bubbles on its own after about 24 hours. What better way to demonstrate their product than to make this video of an almond being smashed with a hammer on top of an iPhone 4: Well, I'm sold. Apparently, Buff Labs is based in Asia and doesn't sell these screen protectors directly. Some sources have stated that you can find these screen protectors online for $20-$30 each, but I have yet to track them down on Amazon or eBay. For more information and videos of the screen protector in action, visit Buff Labs. If you happen to find out where one of these can be purchased, drop us a line in the comments! 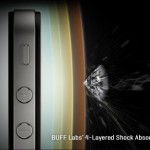 Buff Labs' Screen Protector Is Tough Enough To Withstand A Hammer
Nothing found :(
Try something else