You are using an outdated browser. Please upgrade your browser to improve your experience.
by A.T. Faust III
April 21, 2012
When the iPad launched in April 2010, Apple made a big marketing push to highlight the Internet's first round of "iPad-ready" sites. These big-time digital destinations, while relatively few in number, were important to the early success and adoption of Apple's armchair-friendly browsing experience, and the Cupertino company featured them front and center on its iPad homepage. Because of the late Steve Jobs' close ties to Disney, it's no surprise that the company -- via its globally-popular ESPN online portal -- pretty much led the initial charge of tablet-optimized content. As a frequent visitor of ESPN.com, I've closely followed each change the website's made as Apple's tablet continued -- and continues! -- to burn through usage estimates in the consumer space. At first, the site merely mirrored an HTML5 version of what you'd normally see on a desktop computer. Instead of directing you to the ghastly "mobile" version (un)popular from years past (iPhone users know what I'm talking about!), ESPN put a perfectly-rendered desktop presentation between the iPad's comfortably-wide borders. It was pretty nice: Everything loaded reasonably quickly, and you rarely had to zoom in to engage the site's slew of tappable links. Of course, it became clear that the iPad offered far more in the way of interactive capability than the typical desktop environment could effectively provide, and ESPN's Web engineers eventually released a truly iPad-ready experience. Yes, it took them over a year to come up with the simple, functional style we see today, but it was a welcome change with only one serious caveat. Here's what I said about the change around the time it went live last September:

In terms of usability, the headline stories feature buttery-smooth, swipe-focused navigation, and — coupled with fullscreen layouts — the experience should be enough to keep most users from switching (back) to the classic presentation. The only negative? No pinch-to-zoom! Other than that curious oversight/huge potential deal-breaker, you’ve now got an elegant way to follow your favorite sports, teams, and players.

Slowly, between curious UX head-scratchers and a general failure to improve basic presentation issues (including the aforementioned lack of zoom), ESPN.com has gone from one of my favorite iPad websites to a broken, frustrating, flagrant foul-ridden experience I no longer enjoy. What once was a headlining iPad seller is now flatlining in the iPad cellar. ESPN's chief Web designers need to spend some quality time in the tape room. Or the penalty box. Here's why ESPN.com for iPad sucks: First, there's that thing I already mentioned: zoom. Or rather, the lack of it. Why readers are still forced to view content at exactly one size is beyond me. Frankly, it's offensive. On a device where zooming in and out is so fluid, intuitive, and viscerally satisfying, it's a shame to be forced to navigate a one-size-fits-all layout. Sure, a few folks will always dissent, but this isn't even a one-size-fits-most situation. It's a lot closer to one size fits none. It's disorienting, ugly, and unnecessary. No website should go out of its way to break the fundamental features Apple's built into Mobile Safari. Pinch to zoom is a big part of the iPad's allure. If I can zoom in on my Mac with a simple double-tap on my trusty Magic Mouse, I ought to be able to do the same thing on a tablet purpose-built for the function. But ESPN.com has more problems. Almost since day one, I've noticed that iPad-specific layouts often fail to include the same links as their desktop counterparts. I'll often be reading an article that references another story or subject with an obviously link-bearing word or phrase, but there's nothing to tap on and no source to visit. Imagine reading any post on a blog like AppAdvice without the customary, clickable cross-references you're used to, and you'll see what I mean. With a system like that, you'll never get the whole story, and you'll miss out on a lot of insight that the author intended to get across. It makes the overall system less efficient, and that flies in direct defiance of the iPad's raison d'être. Teams and player names are properly linked, but the rest is a hit-or-miss affair. Back in the day, before Page 2 got scrapped and rebranded, reading Paul Lukas' Uni Watch column on the iPad was an impossibly frustrating affair. Other disparities between ESPN.com's tablet and desktop versions are equally questionable. On the iPad, author "archives" only give you the latest handful of a given contributor's stories (which, for whatever reason, aren't even comprehensive for the short time covered), and sidebar links to related stories, events, and hubs are nonexistent via Mobile Safari. I can swipe through top stories; there's no reason I shouldn't be able to use a similar gesture to reveal these important contextual menus. HTML5 can do it, ESPN's coders can do it, so why can't I? But it's not this little stuff that really drives me crazy about ESPN.com. The zoom thing is massively annoying, sure, and the rest is generally irritating but by no means deal-breaking. One of the site's newest features, though, is completely unacceptable, and it's driven me back to the old desktop view. Are you familiar with this screen: If so, you know what I'm talking about. See, I use my iPad almost exclusively in portrait mode. There are many of you who use yours mostly in landscape, but I don't care about that. I care about my experience, and ESPN's recent habit of forcing me into rotating my iPad just to view a box score or read a fresh game recap is absolutely mindless. Worse, there's never any solid indication of which articles are landscape-only, so it's a gamble each time any link piques your interest. (I guess ESPN's under the impression that it's a pair of polarized sunglasses or something.) "Gamecast" -- which is what this crummy feature is called -- works in both orientations on the much smaller (and therefore more theoretically restrictive) iPhone screen, so why does it force tablet readers to jump through such style-cramping hoops when it has so much more real-estate at its disposal? To add insult to injury, you can actually see the content (and an appropriately-portioned layout) in portrait mode as the page loads: If I could just go with the glitch, I'd be happy. Instead, I get a blacked-out wall of stupid, and I almost always just reverse course and browse to the next feed. In the rare case I actually make the effort to flip my iPad a full 90 degrees, this is what greets me: Notice the thick, black bar of nothing on the righthand side. Confused? Me, too. Tonight, 7 out of 30 (non-membership or fantasy-specific) headline entries redirected me to this Gamecast nonsense (which, apparently, ESPN also uses for its "photo products"). Of course, if you count all the box-score and banner links found on the front page, the ratio's up to 25 out of 48. That represents roughly 23 and 52 percent of ESPN's homepage, respectively, and it's often much higher (particularly on baseball- or basketball-heavy days). Ridiculous! I don't know if the Web team at ESPN ever read a manual on UI basics, but I'm pretty sure this kind of thing is covered on the first page. Until ESPN figures out how to properly format text and implement appropriate menus and links, there's only one link I care about. It's right down there on the bottom of the homepage: desktop mode, baby! Unfortunately, for now, I'm sad to say it is. 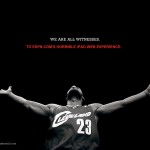 ESPN's Once-Great iPad Website Is Worse Than LeBron In Crunch Time
Nothing found :(
Try something else