You are using an outdated browser. Please upgrade your browser to improve your experience.
by Dave LeClair
April 15, 2012
More details have emerged about the upcoming independent film about the life of Steve Jobs, thanks to an interview with producer Mark Hulme by Neowin. The movie will follow the life of Steve Jobs from 1971 to 2000. This time of Steve's life is the same period explored by the TV movie "Pirates of Silicon Valley." We first reported on the movie at the beginning of the month, and it seems as though filming is finally going to get underway early next month. Ashton Kutcher is the perfect choice for the role of Steve Jobs because he bears an uncanny resemblance to him. Kutcher has played a wide range of roles ranging from the downright silly "Dude, Where's My Car?" to more serious roles in movies such as "The Butterfly Effect." The working title for the movie is "Jobs: Get Inspired," but I am hopeful that they will change it to something a little more creative and less bland. Perhaps I am being too politically correct; the title sucks. When asked if he expects the friends and family of Steve Jobs to appreciate his portrayal in the movie he said, "We have purposed for the movie to be an accurate and inspirational portrayal of his fascinating life and the huge impact he had on the world, so yes we expect his family and friends to appreciate it." First time producer Mark Hulme said they are planning to release the movie in the fourth quarter of this year. Will you be lining up on day one to see Kutcher play Jobs? 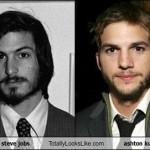 Filming Will Start Next Month For Steve Jobs Movie Staring Ashton Kutcher
Nothing found :(
Try something else