You are using an outdated browser. Please upgrade your browser to improve your experience.
by A.T. Faust III
April 10, 2012
For AT&T, the allure of the iPhone may be coming to an end -- at least as far as its advertising arm is concerned. Today, it was reported by Ad Age that Nokia's newest Windows Phone flagship, the Lumia 900, is getting the royal treatment in the form of a whopping $150 million marketing blitz. This means AT&T is actually spending more money to hawk Microsoft's partner project than it did to move the iPhone 4S. And while the accuracy (and/or efficacy) of Ad Age's data-gathering has since been called into question, I wouldn't be at all surprised if the underlying claim was generally valid. If that's indeed the case, I can't say the move is particularly shocking. We are living in an age where the iPhone's become a massively popular, self-selling phenomenon. These days, it's almost certainly more important for carriers to push their second-choice exclusives as hard as possible, mainly because the iPhone's finally available with every wireless company not called T-Mobile. Still, it's surprising that the almost certainly ill-fated Lumia 900 is the target handset for AT&T's marketing efforts. True, it's probably the most stunning physical specimen outside of Apple's world-beater, but its operating system is rapidly losing marketshare to the double-headed iOS/Android machine. But I'll admit it: If I simply couldn't get an iPhone, the Lumia 900 would be the first runner up. 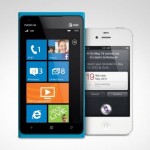 Is AT&T Really Pushing Its Nokia Exclusive Harder Than The iPhone?

Is AT&T Really Pushing Its Nokia Exclusive Harder Than The iPhone?
Nothing found :(
Try something else