You are using an outdated browser. Please upgrade your browser to improve your experience.
by A.T. Faust III
April 23, 2012
By now, you've probably heard about Pebble. Backed by overwhelming Kickstarter support, the ARM-powered wrist accessory blew past its $100,000 funding goal with a million bucks pledged in just 28 hours. Now, at over 41,000 backers and $6,000,000 in the project piggybank, the Pebble team still has another 25 days to go before moving past Kickstarter and kickstarting phase two. That should give you more than enough time to figure out how badly you want or need one of these. I'll admit, the video is compelling: But beyond all that, what exactly is Pebble? Well, I can tell you what it's not: a new concept.  Now, I'm not hating on Pebble by any means. Rather, I'm simply pointing out that the accessory, as described, matches almost exactly what critics and fans were hoping Apple's sixth-generation iPod nano would end up becoming. After all, the MP3 player already displayed an active clock graphic, could blast music from your iTunes library, and was the perfect size to effectively double as an iPhone-ready wristwatch and go-between. However, going on two years later, Apple simply hasn't responded with the obvious nano upgrades we'd all initially anticipated. There's still no Bluetooth capability, the nano can't run any apps or display iPhone alerts, and it hasn't got more than a handful of stylized watch faces to go along with all the third-party bands and straps you can buy.  It's unlike Apple to miss such synergistic opportunities among its own family of devices, and that oversight left the door open for products like Pebble. Yes, I'd rather have a watch designed by Jony Ive, but that doesn't seem to be on Apple's roadmap.  And that should tell you something.  It tells me that Apple doesn't really believe in the potential of the wearable computer.  While I remain undecided on the matter (I do think we'll stop short of William Gibson-style cybernetic implants), it's clear from public feedback that the masses have made up their minds. At the very least, they're ready to give the tech a try.  In addition to Pebble's wealth of positive PR, Google made headlines earlier this month with Project Glass, a glasses-based wearable computer founded on the principles of augmented reality. The two approaches, of course, are significantly different. While Google is dabbling in a wholly new computing platform, Pebble seeks to simply enhance your smartphone experience. Right now, the latter approach seems far more marketable and adoptable, and insight gleaned from the success or failure of Pebble will mean a whole lot more than whatever comes of Project Glass.  And really, that's why I'm so surprised Apple let this opportunity pass it by. By simply giving us what we wanted from the iPod nano, Apple could've field-tested the functional impact of a new type of device and collected invaluable data on where, when, why, and how people most like to interact with their mobile devices. If wearable computers are indeed the future, Apple would've had another significant head start in a new post-PC sector. Whether you keep it in your pocket, clip it to your bag, or wear it on your wrist, that's a massive leg up on the competition.       Might Apple still come out with an iPhone companion wristwatch? Sure. If the Pebble takes off, maybe they even will! Let someone else handle the R&D for once, right? Perhaps that's been Apple's plan this whole time... 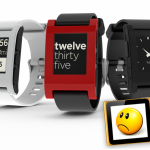 Pebble Smartphone Watch Shows What iPod nano Could Have Been

Pebble Smartphone Watch Shows What iPod nano Could Have Been
Nothing found :(
Try something else