You are using an outdated browser. Please upgrade your browser to improve your experience.
by Kathryn Zane
April 25, 2012

My kids love dinosaurs. A trip to the natural history museum is like a trip to the candy store. Anything that remotely deals with dinosaurs are an immediate item of interest to them. Taking Pictures With Dinosaurs was a great app for them. They had fun posing with the dinos and had specific ideas of how they wanted to pose.

Many photo apps require you to take the picture and add the items later. There are some benefits to doing this, but the hardest thing is not being able to see what the picture will look like before you snap it. All the editing is done to a previously taken photo. Now, I'm a horrible photographer. All of my pictures are blurry or focused in some strange way. Being able to see what I'm doing is a tremendous help to a novice like me.

There are four dinosaurs that the app comes with for free. There are bundles that you can pay for, but the four free ones are enough variety for me. The famous and desirable T-Rex is one of the four. So, never fear. Each dino comes with five different poses. You can also resize them by pinching the screen. As you can see from my poorly taken picture, they can become small enough to sit in a hand, or they can take up the majority of the picture while someone pretends to shrink in fear.

Sharing the pictures is also easy. The pictures save automatically to the app's gallery. You can use Twitter or Facebook to post the picture online. There's also old-fashioned email. If you want to save it to your camera roll, just hit the save button. It's that easy. There's also a trash can for any pics that didn't make the cut.

I also have to give a nod to the developers for the adorable roars and growls added to the loading screen. The tags are along the lines of "Rounding up dinosaurs. Grawr." I'm sorry, but they're cute. Every loading screen has some sort of tag like that and a T-Rex wearing a wristwatch. It's a great touch.

As a last point of interest, I want to hear about your favorite dinosaur in the comments. I'm a personal fan of the utahraptor. The velociraptor was actually the size of a large chicken. The utahraptor was 10 feet tall and 20 feet long. It was the biggest raptor known to man. It also had a massive sickle claw on its hind legs. If I had to pick a dinosaur that would haunt my nightmares, it'd be this one.

Taking Pictures With Dinosaurs is an iPhone app that's available in the App Store for the awesome price of FREE! 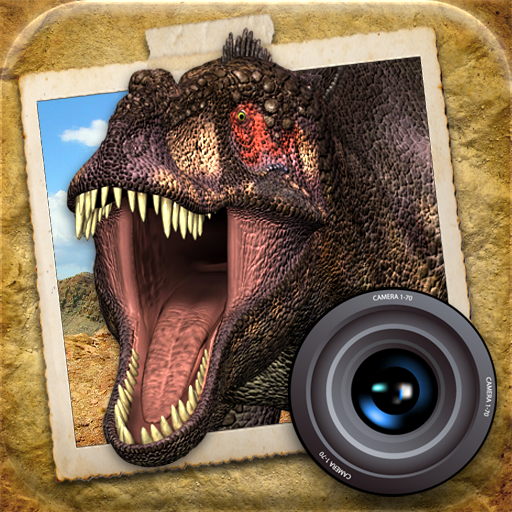 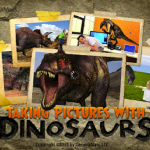 Quirky App Of The Day: Taking Pictures With Dinosaurs

Quirky App Of The Day: Taking Pictures With Dinosaurs
Nothing found :(
Try something else