You are using an outdated browser. Please upgrade your browser to improve your experience.
by A.T. Faust III
April 18, 2012
Apple's head honcho of design, Sir Jonathan Ive, has been nominated for an Intellectual Property Day 2012 award dubbed "British Visionary Innovator." It's not a major prize by any stretch of the imagination, but it's being given out by the U.K.'s Intellectual Property Office in honor of Britain's most influential contemporary thinker. From the website's announcement:

Our list contains famous names from the world of Television, Music, Art, Design, Business and Science, all of whom have achieved considerable success or displayed ‘visionary’ behaviour in spotting ‘The Next Big Thing’, or developed innovat[ive] products, services or designs never seen before.

I'd say Jony's a shoe-in, except for the fact that the list is so categorically diverse that it's difficult to say whose contributions matter more. Still, I'm pretty sure Apple's Senior VP has a better shot at this thing than vacuum-cleaner magnate James Dyson. Although, it probably doesn't bode well that the agency misspelled "Jonathon" Ive's name... 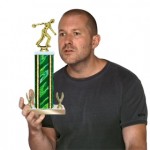