You are using an outdated browser. Please upgrade your browser to improve your experience.
by Dave LeClair
May 5, 2012
Everyone seems to be under the misconception that if you write an iOS app, it will get you rich quickly. People see the success of games like Angry Birds and Draw Something, and think that they can do it too. The fact is OMGPOP had multiple games before their first smashing success. In fact, according to AppPromo, 59 percent of applications released on iOS actually lose money for the developer. While 59 percent is high, an even more surprising number is that 80 percent do not generate enough revenue to be a stand alone business. They conducted their first annual survey and made a handy infographic breaking down the information they learned. It is actually quite fascinating when you see the shocking number of applications that fail miserably upon hitting the App Store. Only 11 percent of developers had their application reach 500,000 downloads or more. On the flip side, 63 percent of app creators saw less than 50,000 downloads for their app. As it turns out, it comes down to marketing. The applications that were successful spent an incredibly large amount of time and money marketing their app. The most successful application developers have an annual marketing budget of at least $30,000 and spent 14 percent of their time marketing their apps. These are some incredibly interesting statistics, and it's some valuable information for developers. Like anything, having a great product means nothing if you don't invest the time and money to let people know it exists.   (via: VentureBeat) 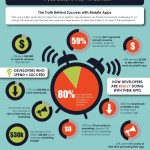 A Whopping 60 Percent Of iOS Apps Fail To Make The Developer A Profit
Nothing found :(
Try something else