You are using an outdated browser. Please upgrade your browser to improve your experience.
by Tommy Ly
May 6, 2012
If you regret not opting for AT&T's unlimited data plan for the iPhone when you had the chance, that's all right, because AT&T regrets offering it in the first place. At least, that's what AT&T CEO, Randall Stephenson, said at a wireless industry conference held earlier this week. The New York Times is reporting that Stephenson was upset about how light data users were subsidizing the heavy ones. That is, if AT&T had never offered unlimited data for the iphone in the first place, then heavy data users would have to pay more for all those extra megabytes their phones gobble up each month, similar to the tiered data plans currently offered. Stephenson had this to say about offering unlimited data for the iPhone:

My only regret was how we introduced pricing in the beginning, because how did we introduce pricing? Thirty dollars and you get all you can eat. And it’s a variable cost model. Every additional megabyte you use in this network, I have to invest capital.

Although AT&T stopped offering unlimited data plans in 2010, customers who had the plan prior to the introduction of tiered data plans were allowed to keep their unlimited plans, or have them "grandfathered" to newer devices. AT&T's new, tiered data plans worked well for the company last quarter, bringing in a staggering $6.1 billion in revenue from mobile data alone. Customers still using unlimited data plans couldn't be hurting the company that much, could they? The heavy data usage associated with the iPhone isn't the CEO's only gripe with Apple's flagship device, as he had this to say about iMessage, which allows iDevice owners running iOS 5 and higher to send free text, photo, and video messages to one another over Wi-Fi, effectively causing AT&T to lose money from their own unneeded messaging services:

You lie awake at night worrying about what is that which will disrupt your business model. Apple iMessage is a classic example. If you’re using iMessage, you’re not using one of our messaging services, right? That’s disruptive to our messaging revenue stream.

Despite the iPhone keeping Stephenson up at night, he doesn't regret AT&T's decision to carry the phone which changed, well, everything.

Mr. Stephenson was chairman of Cingular’s board at the time, and he said Mr. Jobs had met with Stan Sigman, who was chief executive of Cingular. After the meeting, Mr. Sigman approached the board to talk about a “unique opportunity.” He hadn’t even seen a picture of the iPhone, but he described a device with a touchscreen that one would use to make calls, do e-mail and run apps. The board was nervous about the Apple smartphone because it was aware that it would transform its business model, Mr. Stephenson said. “I remember asking the question: Are we investing in a business model, are we investing in a product or are we investing in Steve Jobs?” Mr. Stephenson said. “The answer to the question was, you’re investing in Steve Jobs. Let’s go after this thing. And we went after it, and the rest is history.”

To be fair, I don't think anyone could have expected the iPhone to change the game as much as it has since it first launched. The App Store didn't even exist when the iPhone launched, and, realistically, no one would be using an excess of 2GB of data monthly on the original unlimited data plan for iPhone (which only ran on the painfully slow EDGE network). Do you think offering unlimited data plans for the iPhone was a bad idea for AT&T? Those who have them don't (myself included), but even then, AT&T won't let you eat up data to your heart's content. (via The New York Times) 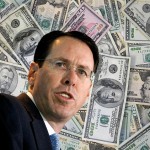 AT&T's CEO Regrets Offering Unlimited Data For The iPhone
Nothing found :(
Try something else