You are using an outdated browser. Please upgrade your browser to improve your experience.
by Bryan M. Wolfe
May 8, 2012
AT&T, the nation’s second largest carrier, is working to make family data plans a reality. This news comes from Ralph de la Vega, CEO of AT&T’s mobile business, who recently spoke with CNET. Although mobile customers have long been able to share minutes with other family members on the same plan, the same isn’t true with data. However, that could soon change. Although no release date has been announced, AT&T could "soon" unveil shared data plans. These types of plans would allow each member on the same cellular plan to share 3G or 4G/LTE data regardless of device. For example, the service could extend to the iPhone and iPad, and to Android devices. Currently, customers on the same plan must purchase a separate data plan for each device they own. For light users, this could mean throwing away data each month, while heavy users, even those on the same plan, might have to buy extra data to avoid overage charges. Under a sharing plan, less data would be wasted. According to de la Vega, speaking at the CTIA Wireless trade show:

"I'm very comfortable with the plan that will be offered to our customers.”

Earlier in the year, the CEO stated that the implementation of family data plans proved difficult due to IT and billing issues, and “how the carrier would subsidize devices and get a decent return despite the shared data bucket.” Verizon is expected to unveil similar plans too. Hopefully, we’ll hear more about AT&T's plan soon. When we do, wouldn’t it be nice if it included rollover data too? -- (Photo: Marguerite Reardon/CNET) 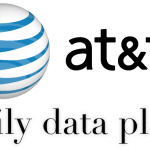 Finally A Great Idea From AT&T: Family Data Plans
Nothing found :(
Try something else