You are using an outdated browser. Please upgrade your browser to improve your experience.
by Bryan M. Wolfe
May 31, 2012
Five years after Apple unveiled their first iPhone, we now have our first prepaid plan in the United States. Beginning next month, San Diego, California-based Cricket Communications will offer Apple’s handset off contract and with an unlimited monthly plan, according to news first reported by The New Web. Starting June 22, Cricket will offer the iPhone 4S and iPhone 4 with “unlimited” voice, text, and data for $55 per month. Unlimited, in this case, means 2.3GB of data per month, which is based on their “fair usage” policy. Upfront costs are $399 for the 8GB iPhone 4 and $499.99 for the 16GB iPhone 4S. A subsidiary of Leap Wireless, Cricket owns and operates the seventh largest wireless telecommunications company in the U.S. It currently services 6.2 million customers across all 50 states. It currently utilizes Sprint's 3G network. According to Apple spokesperson Natalie Harrison, speaking to The Loop:

“By making iPhone available on pre-paid plans through Cricket Wireless, we are making the best smartphone more accessible to an even broader market in the U.S."

Cricket’s iPhone plans are available at retail outlets and online. 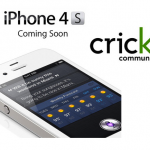 Five Years Later, The First Prepaid iPhone Is Here
Nothing found :(
Try something else