You are using an outdated browser. Please upgrade your browser to improve your experience.
by A.T. Faust III
May 4, 2012
Getting used to touch-typing on your iPad can be an involved, lengthy task, but you're bound to get the hang of it eventually. After two years with the tablet, I'm able to get by at around 40 WPM in portrait mode -- and I'm even faster in landscape! However, once you start mixing in the writer's requisite assortment of edits, things can get a little bit...slow. See, any time you need to reposition the cursor, you've got to take your hand(s) off the keyboard and make a dedicated tap (or tap and hold if it's precision you're after) to get to the proper place on the page. It can pull you out of your groove and put you right in a rut. Facing the issue head-on, YouTuber danielchasehooper created the following concept video, whereby the iPad's customary taps are replaced by a series of multitouch swipes and toggles across the virtual keyboard's surface: While the concept is clever and looks eminently workable, there are a few problems facing any potential implementation on Apple's end. For one, this input method breaks the all-important metaphor of the iPad's keyboard. As things stand now, pressing the shift key and dragging to a letter will capitalize that letter upon release, which is the functional touch equivalent of how a real, physical keyboard works. (Yes, most people don't actually drag across the keyboard to achieve this, but some folks -- particularly children -- often do.) And having to manipulate a cursor in this manner is visually counterintuitive, which is usually a flat-out deal-breaker for Apple. Plus, built-in short swipes are already a part of the iPad keyboard's various default shortcuts. Swipe up on the comma or period keys and you'll get an apostrophe and quotation mark, respectively. I use these quick gestures constantly, and I wouldn't at all appreciate seeing them traded out. There's also the question of accidental input to consider. Depending on general user habits and the sensitivity of the solution, it could actually end up slowing some folks down by too quickly reading double-taps (or near-double-taps) and going into cursor mode when rapid text entry was the actual intention. All that said, I'd certainly welcome this newfangled "cursor keyboard" as a selectable iOS option. And if Apple added an iA Writer-esque top row to the default text panel, that'd just be icing on the keyboard. If you'd like to see Apple use danielchasehooper's idea, just follow these simple instructions (via iDownloadBlog):

1. Go to bugreport.apple.com, sign in and click “New Problem” 2. Set the title to “Editing Text on iPad (duplicate of rdar://11365152)” 3. Set the product to “iPad,” version number to “N/A,” classification to “Feature (New)” and is it reproducible to “not applicable.” 4. Copy the following letter and paste it in the Problem Details section then click submit “I just saw Daniel Hooper’s iPad keyboard demo and I want that for my iPad! (Check out the video here: http://www.youtube.com/watch?v=RGQTaHGQ04Q) Apple says the iPad is the future of the Post-PC world; if it’s going to be my primary keyboard, I want a better way to edit text! Tapping directly on text to move the cursor works well for small portions of text, but we don’t just write short portions of text anymore! When performing lots of edits in larger documents the direct interaction metaphor falls apart for cursor control. Even short portions of text can be painful to edit when you need to move the cursor to a precise location. Would you ever want to write a document on your computer without using the arrow keys? This is the reality iPad users face because they do not have the equivalent of arrow keys. There is a better way.  Take advantage of gestures by making a drag over the keyboard UI move the cursor. Move the cursor in word increments when dragging with two fingers. And finally, let the user select text while dragging when they hold down shift.” 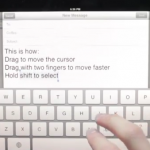