John Browett is Apple's senior vice president of retail, reporting to CEO Tim Cook. Browett serves on the company's executive team and oversees Apple's retail strategy and the continued expansion of Apple retail stores around the world. John joined Apple in April 2012 from European technology retailer Dixons Retail, where he was CEO since 2007. Prior to joining Dixons Retail, Browett held a series of executive positions at Tesco plc including CEO of Tesco.com. Earlier in his career he advised retail and consumer goods clients at Boston Consulting Group. He holds a degree in Natural Sciences from Cambridge University and an MBA from Wharton Business School.

Though Apple's new chart makes it look like Browett is Tim Cook's right-hand man, it's important to note that, after Cook, all of Apple's execs are presented in alphabetical order. There hasn't been some crazy shakeup in management, and everything is business as usual. Except for Browett. After all, he's just been selected to help lead the world's most popular and profitable brand. He might need a while to get used to that. From all of us at AppAdvice, congratulations, John! Now, if I don't have an Apple Store in my town by the end of the year... [Via ifoAppleStore.com] 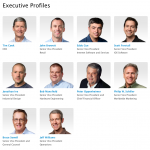 Meet John Browett, The Newest Member Of Apple's Executive Team
Nothing found :(
Try something else