You are using an outdated browser. Please upgrade your browser to improve your experience.
by Bryan M. Wolfe
May 14, 2012
Having problems with iMessage on your iDevice? The problem may be your Mac, according to The New York Times. First released in October with iOS 5, iMessage allows users to send texts, photos, videos, contact information, and group messages over Wi-Fi or 3G. The service is available through the Message app on the iPhone/iPod touch and iPad. Unfortunately, in recent months, iMessage users have gone on Apple message boards complaining that the service is much less reliable than when Apple first released it. As such, some messages are being lost or deleted. Strangely, iMessage for Mac seems to be the culprit. Launched in February, iMessage for Mac is currently in beta. The application will arrive officially as part of Apple’s newest OS X, Mountain Lion, which could be released following next month’s Worldwide Developers Conference. In the meantime, customers experiencing problems with iMessage for iOS are encouraged to delete the beta version of iMessage on their Mac. In doing so, the problems should go away. To delete the application and reinstall the previous version, go Messages > Uninstall Message Beta. It should be noted that Apple declined to comment, and the company has not acknowledged the issue in its support bulletins. Have you had problems with iMessage since installing the Mac beta? 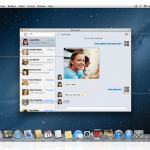 Report: iMessage Problems On iPhone Tied To Beta Software For Mac
Nothing found :(
Try something else