You are using an outdated browser. Please upgrade your browser to improve your experience.
by Dave LeClair
May 4, 2012
Generally the news that comes up in the Apple world follows a similar pattern: new products are announced, earnings results are great, or something along those lines. This story is nothing like that. On a flight over Australia, an iPhone actually started smoking, causing the flight crew to spray it down with a fire extinguisher. This actually happened  in November of last year, but the Australian Transport Safety Bureau just released their report on the event today. After the device was extinguished, it was sent to the United States for testing, and as it turns out, a faulty repair job was actually responsible for the spontaneous iPhone combustion. A small screw for the battery bay was not put back properly after the repair, and it ended up wiggling around in the device, eventually poking a hole in the battery casing and causing a short circuit. This led to the device overheating and smoking, which eventually led to the event on the airplane. The Australian Transport Safety Bureau has since issued a warning that any repairs to a mobile device should be done by an authorized repair center. I cannot say I disagree. Even if your device does not spontaneously combust, you could still run into problems with a bad repair job. Please, the next time your device needs to be fixed, take it to someone who knows what they are doing. Source: The Sydney Morning Herald 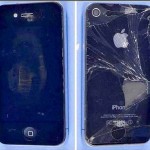 Smoking iPhone 4S In Australia Reminds Us Of The Importance Of Authorized Repairs
Nothing found :(
Try something else