You are using an outdated browser. Please upgrade your browser to improve your experience.
by Tommy Ly
May 18, 2012
While you were playing solitaire on your old PC way back when, did you ever think that one day you'd hear the words "virtual reality" and "solitaire" in the same sentence? Well, it's 2012, phones are as powerful as computers, data is stored in clouds, and now Solitaire Zen is the "world's first virtual reality Solitaire game." At its core, Solitaire Zen is classic Klondike solitaire (like on Windows), but that's just the start. Gone are the days of clicking those cards while the obnoxious green background stares back from your monitor. In Solitaire Zen, you can get up from the current game, look at your cards, the environment, the sky, and anything else around you. Enjoy the sights and hyper-realistic sounds of the outdoors while playing solitaire, without the outdoors. Take a look at this trailer to see what I mean: Other than the solitaire, you'll be able to gain experience, level up, and show your rank across global leader boards. Solitaire has come a long way. Solitaire Zen should be hitting the U.S. App Store this Saturday as a universal application. With those crisp, Retina-quality graphics, this is definitely worth checking out. At the moment, there is no word on pricing, but free and paid versions should both be available at launch. As always, we'll keep you posted. Until then, you can visit the game's official site. Will you try your hand at Solitaire Zen? Or, is it not in the cards for you? 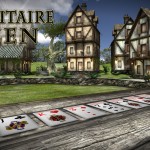 Solitaire Zen To Launch This Weekend

Solitaire Zen To Launch This Weekend
Nothing found :(
Try something else