You are using an outdated browser. Please upgrade your browser to improve your experience.
by Bryan M. Wolfe
May 29, 2012
The next iPhone could include a new camera, a larger screen, and maybe, an A6 chip. Apple’s sixth-generation handset might also include something even more important: Thunderbolt technology, according to a new report from CNet. Created by Intel and available on Apple’s MacBook line, Thunderbolt (codenamed Light Peak) offers users a way to transfer large amounts of data (up to 10Gbps) and connect a number of different devices. It does so using an interface with DisplayPort and PCI Express cards. Unfortunately despite its potential, Thunderbolt hasn't exactly replaced USB. If fact, one year after it arrived on MacBook Pros, most companies have so far shied away from the technology. That could change if Apple were to include a Thunderbolt port on the next iPhone. Says CNet:

Of course, this could all change with tens of millions of Thunderbolt compatible iPhones in people's pockets. Not to mention the millions of iPhone compatible third-party accessories. This, in turn, could inspire the widespread adoption of Thunderbolt by big-name computer manufacturers, which would have other smartphone designers wondering whether their next phone should make use of Thunderbolt, as well.

While Thunderbolt on the next iPhone wouldn't excite customers like a 10-megapixel camera would, its usage on the handset could lead to new products. For one, Thunderbolt could offer a new way for iPhones to connect to peripherals, and one that is capable of handling video and audio sharing. In addition, it could lead to what CNet calls an “iOS super-dock.” With this, one could connect an iDevice to a computer and deliver access to: “the Web over 3G, your personal data, all your phone capabilities like messaging and calls, apps, social media logins — the works — but, with desktop like performance and applications, and a large external display.” For Thunderbolt to work, however, Apple would have to get past two technical hurdles. First, the Thunderbolt chip on the iPhone would have to be made significantly smaller than the one used on MacBooks. For another, Apple would have to create a cable or an adapter that interfaces with USB ports. Finally, Apple would have to find a way to lower Thunderbolt’s cost. Right now, for example, a 2-meter Thunderbolt cable costs $49 in the Apple Store. However, Apple is the one company that could convince millions of customers to switch interfaces on next generation devices. And if this were to happen, the next iPhone could indeed be a game changer. Should Apple switch to Thunderbolt on their next iPhone? Source: CNet Photo: An iPhone concept featuring a Thunderbolt port by YouTube user Device Station/Screenshot CBSi) 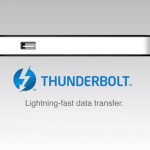 Thunderbolt Technology Could Arrive On Next iPhone

Thunderbolt Technology Could Arrive On Next iPhone
Nothing found :(
Try something else