You are using an outdated browser. Please upgrade your browser to improve your experience.
by Bryan M. Wolfe
May 24, 2012
The third-generation iPad is now being used by an equal number as those with the original iPad. Remarkably, this happened just two months after the new iPad arrived according to The Next Web. According to a prerelease survey from Localytics, 20 percent of U.S. customers now use the third iPad, which first arrived on March 16. This same percentage uses the original iPad, which launched on April 3, 2010. The iPad 2 remains the most used tablet, with 60 percent of the market. First launched on March 11, 2011, the iPad 2 remains on the market in a 16GB configuration for $399. Companies like Fox, AT&T, Rhapsody, Qualcomm, and The New York Times use Localytic’s app analytics solutions. A Localytics report published just three weeks after the third-generation iPad debuted showed the new tablet being used by 14 percent of U.S. customers. This compared to 24 percent for the original iPad and 62 percent for the iPad 2. Source: The Next Web 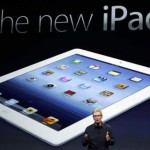 Two Months Later, The New iPad Ties The First One In Usage

Two Months Later, The New iPad Ties The First One In Usage
Nothing found :(
Try something else