You are using an outdated browser. Please upgrade your browser to improve your experience.
by Tommy Ly
May 2, 2012
After working with companies such as Lucasarts, SEGA, Namco, and Atari over the past 13 years, it appears that one developer, simply referred to as "James" on his blog, has set out to create his own company: Springloaded Games. His first iOS title, Hiragana Pixel Party, is expected to be submitted to Apple in the coming weeks. James describes the game as being "like PaRappa the Rapper, but it's crossed with a Japanese dictionary." Hiragana Pixel Party's launch trailer sums it up pretty well:

It appears as though the gameplay will be highly rhythm-based, with some memorization thrown in the mix. While this may turn out to be a fun game, it should be noted that all these cute graphics and catchy tunes are only here to serve one purpose: to help you learn hiragana and katakana (forms of Japanese syllabary). In the YouTube description for the game's launch trailer, it notes that James cannot speak Japanese. So, why should should trust him to help you learn the language? James had this to say on his blog:

I have been learning Japanese, and the dryness of the learning material has kind of got to me, so I decided to make a game to teach me how to read, rather than just memorizing the characters in a boring traditional study like way.

If children's shows have taught us anything, it's that music and repetition go hand-in-hand when you're trying to learn something. Of course, we won't be sure of how well Hiragana Pixel Party's gameplay mechanics will help you learn anything until it makes its way into the App Store. Until then, you can head to the Springloaded Games blog to see the progress James has made on this solo project. Have you ever tried to learn another language? Do you think a game like this would've benefitted you when you first started? 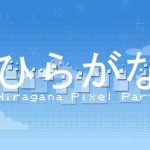