You are using an outdated browser. Please upgrade your browser to improve your experience.
by Tommy Ly
June 27, 2012
According to a report from Localytics, app retention rates are improving across the mobile app ecosystem as publishers are focusing on more than just downloads. Even though the entire app industry (both iOS and Android) saw a 19 percent increase in app retention rates over the last year, iOS dominated Android with a 52 percent higher retention rate. So, what does this mean? Localytics states:

But not all apps are created equally. Delving deeper into the retention and user metrics, iPhone and iPad users are 52% more loyal to their apps than Android users. A healthy 35% of Apple iOS users launched an app more than 10 times after downloading, compared to 23% of Android users. The average Android app also suffers from 24% one-time usage rate compared to just 21% one-time usage rate for iPhone and iPad.

Could this have to do with the iPhone having a 94 percent retention rate against Android's 47 percent?  Although the study was relatively small, it's still obvious that there are millions of people who prefer iOS to Android. Despite the Android Market closing in on the App Store's amount of available apps, apps on iOS just work better in my opinion. Developers of iOS apps have less to worry about when developing apps (Retina graphics, iPhone, iPad, or universal compatibility), while Android is notorious for fragmentation issues across devices. That is, developers need to make their apps compatible with different phones, screen sizes, and all of Android's different operating systems. The iPhone, iPod touch, and iPad all live happily in iLand together, so those fragmentation issues are practically nonexistent in iOS. What do you think of the report? Are you surprised by its findings? Source: Localytics Via: The Loop 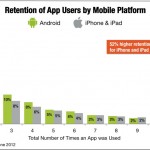 Android Getting Crushed By iOS In App Retention

Android Getting Crushed By iOS In App Retention
Nothing found :(
Try something else