You are using an outdated browser. Please upgrade your browser to improve your experience.
by A.T. Faust III
June 13, 2012
Though the iOS 6 beta was just seeded to developers, evidence of curious change is already making its way around the blogosphere. This particular tidbit, submitted to us earlier today under the condition of anonymity, is a bona fide head-scratcher. According to the above pair of screenshots, the iTunes app in iOS 6 has dumped all reference to a trio of previously popular categories. As you can see, the app no longer includes any mention of Podcasts, Audiobooks, or iTunes U. Naturally, that means one of three things: Either it's a beta bug or oversight (or experiment) and nothing's practically changed, it's an indication that Apple plans to drop those specific media, or the categories are simply being moved to other stores within iOS. While the first option is possible, it's not particularly likely. Nor is it likely -- in fact, it's entirely impossible! -- that Apple intends getting rid of the features altogether. And that means that they're just being moved. So, where are they going? That's where we're not sure. Logically (which is really the only way to approach something like this), it seems like Podcasts will either get folded into the Music app itself or become part of some unannounced "Radio" app when iOS 6 launches. Audiobooks is a little easier to figure out -- it'll likely relocate to where it actually belongs, in the iBooks store. And with iBook's heavy emphasis on the digital textbook revolution, that's also where iTunes U will probably end up. Of course, none of it matters a single whit to me -- I don't use any of 'em! Update: That was fast! We've just received a tip that the iTunes U store is moving to its dedicated app (which, frankly, I'd forgotten even exists). Makes sense. The same source, however, says that the Podcast category is still nowhere to be found. No word on Audiobooks yet, either. 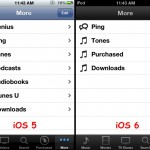 Apparently, Apple's Breaking Up Part Of iTunes In iOS 6

Apparently, Apple's Breaking Up Part Of iTunes In iOS 6
Nothing found :(
Try something else