You are using an outdated browser. Please upgrade your browser to improve your experience.
by A.T. Faust III
June 2, 2012
Between the technical difficulties facing our existing cellular infrastructure and vehement carrier opposition against altering the status quo, a future of data-only subscriptions and VOIP-powered mobile telephony seemed a long way off. Now, however, it appears that the light at the end of the (data) tunnel is finally burning bright. And, surprisingly, the torch-bearer is AT&T's own CEO, Randall Stephenson. As AppleInsider reports, Stephenson predicted at yesterday's investor's conference that

data-only wireless phone plans are likely to arrive within the next two years, marking a dramatic shift away from traditional cell network usage toward VoIP and text-as-data solutions like Apple's iMessage. ... "I'll be surprised if, in the next 24 months, we don't see people in the market place with data-only plans," Stephenson said. "I just think that's inevitable."

Stephenson was quick to point out that, at this juncture, AT&T has no pending data-only plan in place for smartphone customers, and his company is -- appropriately for a telecom -- playing everything by ear. Of course, even when such data-only plans actually come to fruition, they won't necessarily be cheaper than their voice-based counterparts. Still, in terms of bang for the buck, they'll probably be a better deal -- for you and hopefully, eventually, the carriers, too. Source: AppleInsider 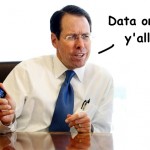