You are using an outdated browser. Please upgrade your browser to improve your experience.
by Bryan M. Wolfe
June 14, 2012
One of iTunes Match’s biggest drawbacks is being corrected in iOS 6.0. Beginning with this iOS release, users are able to stream songs on iDevices, according to news first reported by Apple n Apps. Launched last fall, iTunes Match ($24.99 per year) scans and matches tracks across multiple devices, including Mac, iPhone/iPod touch, and iPad. However, until iOS 6.0, songs on iTunes Match had to be downloaded first before they could be played. That is about to change. With Apple’s next iOS, songs that are stored on iTunes Match can be streamed, leaving out the need to download songs on your iDevice. Keep in mind, streaming will consume data, and of course, you still have to purchase the songs to stream! This is a terrific step forward and is a feature that should have been released last year. Regardless, it will be available to the public this fall when iOS 6.0 is officially released. Are you using iTunes Match? How will this new feature affect your music listening experience? Source: Apple n Apps 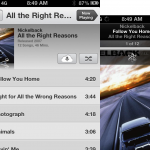 Coming This Fall, iTunes Match Streaming
Nothing found :(
Try something else