You are using an outdated browser. Please upgrade your browser to improve your experience.
by Bryan M. Wolfe
June 14, 2012
Dotan Saguy, the creator behind Lifelike Apps has just announced on Kickstarter, the Smarter iPad Stand. The stand turns any Smart Cover or Smart Case into a full-featured multi-position stand without adding bulk or weight to the iPad. One drawback of Apple’s own line of iPad covers and cases is their limited use as a stand. In their current form, these can only be used for typing and for viewing videos. The Smarter iPad Stand resolves this by attaching two small clips to either side of the Smart Cover or Smart Case. By sliding the clips, the cover’s folds are held straight, which results in a variety of stand positions. For example, sliding one clip over the first fold makes a 33-degree iPad stand. Conversely, sliding the second clip over the second fold can make a 45-degree iPad stand. With the clips, you can now utilize a Smart Cover for other activities such as browsing, reading, or playing games. According to Saguy, who spoke to AppAdvice exclusively:

Before coming up with the Smarter Stand, I was always trying to prop-up my iPad on random objects. It’s such a simple solution, I was shocked when it finally hit me.

Take a look:   As part of his Kickstarter project, Saguy is hoping to raise $10,000 to get the Smarter iPad Stand into production. As such, he is offering a number of different pledge levels for investors. These include a $9 early bird special, which will give you one glossy white Stand at $11 off the normal price. This offer is only being made to the first 500 buyers. For $14, you’ll receive the Smart iPad Stand in the color of your choice. Choices include: light gray, dark gray, blue, green, pink, black, navy, red, and white. Additional pledge packages are also available ranging from $39 to $990. Assuming the project is fully funded, Saguy expects to ship out the first of the Smarter iPad Stands in October. The Smarter iPad Stand looks promising and the fact that it works with Apple's own covers and cases is good too. If you are interested in funding this project, visit Kickstarter. Would you be interested in buying the Smarter iPad Stand for your tablet? 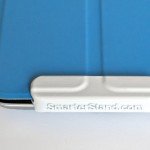 Exclusive: Introducing The Smarter iPad Stand
Nothing found :(
Try something else