You are using an outdated browser. Please upgrade your browser to improve your experience.
by A.T. Faust III
June 27, 2012
While Google was busy showing off its Android 4.1 "Jelly Bean" variant and touting typically remarkable activation numbers (one million devices per day) at today's I/O conference, the company let slip a pair of bigger headliners on its Google Play website: Nexus 7 and Nexus Q. The former, a low cost, ASUS-built tablet running Android 4.1 and featuring surprisingly good specs (including a quad-core Tegra 3 processor, 7-inch 1280 x 800 IPS display, 1GB RAM, and on-board NFC capabilities), is slated for a mid-July U.S. release. The Nexus 7 will come in two versions, selling at $200 and $250 for the 8GB and 16GB models, respectively. The latter device, called Nexus Q, is meant to compete directly with the existing Apple TV. Dubbed the "first social streaming media player, the spherical set-top gadget will stream cloud-based music, video, and YouTube content to users' living rooms. Additionally, a built-in 25-watt amplifier will allow users to add their own speakers directly to the hub, and Wi-Fi, Bluetooth, and NFC are all included. The Nexus Q features 1GB of RAM and 16GB of storage, and it's set to ship in two to three weeks. However, unlike the Nexus 7 tablet above, the Nexus Q will not be bargain-priced. Instead, it's listed at $300 -- dramatically overpriced when compared to its chief rival, the $99 Apple TV. So, while Google's Nexus Q isn't likely to make Apple bat an eye, the search giant's cheap (and sure-to-be loss leading) 7-inch tablet may be just the catalyst needed for the Cupertino company to finalize that iPad mini we've heard so much about. Source: Google Play Via: MacRumors, The Verge [gallery link="file" order="DESC"] 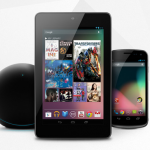