You are using an outdated browser. Please upgrade your browser to improve your experience.
by A.T. Faust III
June 20, 2012
Who hates Samsung more than Apple? Surprisingly, the answer appears to be Terry Gou, chairman of Foxconn parent Hon Hai Precision. In an article published today by the Focus Taiwan News Channel, Gou is quoted on the development of several projects, primarily urging customers to avoid purchasing Samsung's Galaxy S III handset. Instead, says Gou, folks should wait for the iPhone 5, which -- in his words -- will put the latest Korean flagship "to shame." (Of course, whether or not the outspoken boss has any inside information on exactly what the new iPhone will look like, most of us probably don't need convincing.) Chairman Gou then went on to mention that Hon Hai's recent partnership and further investment in Sharp's Sakai presence will yield "the only facility in the world capable of mass producing 60-inch to 80-inch panels." Additionally, that same Sakai plant reportedly has an exclusive agreement with Corning to supply large-format glass panels that no other manufacturer can currently include in their designs. And that certainly bodes well for all this talk of an Apple TV set. 80 inches of Corning-covered goodness? We're gonna need a bigger wall! But Gou's anti-Samsung opinions go a little further. In an interview with the China Times (via the aforementioned Focus Taiwan report), Gou calls Samsung an industrial backstabber, "a company with a track record of snitching on its competitors." Explains the Times:

He was referring to Samsung's action in 2010 of snitching on four Taiwanese companies in an investigation by the European Commission on price-fixing in the flat panel industry. A total fine of 433.92 million euros (NT$17.3 billion) was subsequently imposed to the four Taiwanese firms -- Chimei Innolux Corp., AU Optronics Corp., Chunghwa Picture Tubes Ltd. and HannStar Display Corp. of Taiwan. Samsung was exempted from the investigation by serving as a "tainted witness."

Gou then finishes up by praising his Japanese partners:

"I respect the Japanese and especially like their execution and communication styles. Unlike the Koreans, they will not hit you from behind.”

Harsh? You bet. A little racist even? Possibly. But regardless of all that, it's nice to see a Cupertino crony get this fired up to put the boots to Apple's largest competitor. Via: iLounge Source: Focus Taiwan News Channel 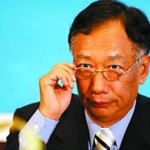 Hon Hai Chairman Tells World To Wait For iPhone 5, Fall Of Samsung
Nothing found :(
Try something else