You are using an outdated browser. Please upgrade your browser to improve your experience.
by Bryan M. Wolfe
June 18, 2012
Microsoft and Barnes & Noble are likely to announce their first joint product later today. When they do, the new product could change how many of us play mobile games. This news would come just two months after the two companies announced a “strategic partnership” that created a joint business dubbed “Newco,” according to TechCrunch. At a special event to be held at 3:30 p.m. EDT in Los Angeles, California, the technology giant and the nation's largest book reseller are expected to launch some sort of tablet that will include Xbox Live streaming capabilities and be specifically geared towards entertainment customers. Strangely, even at this late date, Microsoft is refusing to tell even invitees where the event will be held, only that it will be held somewhere in California’s largest city. On the surface an Xbox-capable tablet seems more likely to compete against Amazon's Kindle Fire, than with the iPad. Barnes & Noble's Nook tablet competes directly with the more popular Kindle Fire.  Still, the rumored Xbox integration could prove popular with Apple customers as well. After all, Xbox is Microsoft's most profitable entertainment/gaming product. We'll keep you updated. Would you be interested in purchasing an Xbox-powered tablet? 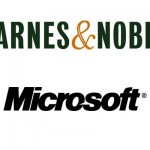 Microsoft, Barnes & Noble Could Announce Something X-traordinary Later Today
Nothing found :(
Try something else