You are using an outdated browser. Please upgrade your browser to improve your experience.
by Bryan M. Wolfe
June 29, 2012
Although Apple is committed to making Siri better in iOS 6, the voice assistant is still not quite right, according to a new study conducted by analyst Gene Munster of Piper Jaffray, as first published by AppleInsider. The study looked at Siri’s accuracy under two situations: in a quiet room with no headphones, and on a busy Minneapolis street through Skull Candy microphone headphones. In total, 800 queries were conducted under both situations. According to the report, Siri’s comprehension on the street was 83 percent, although its accuracy was just 62 percent. In the room, these numbers were better, but not by much. Here Siri comprehended 89 percent of the queries, answering 68 percent correctly. Munster’s conclusion tells the story:

We believe the most likely substitute for Siri is Google text input on the iPhone, not the Google voice search app.

Here are some of the questions Siri answered incorrectly: This fall, Siri will gain a significant upgrade in iOS 6. During my unofficial test of this update earlier this month, I found Siri was significantly better than the current version. So much so that I penned my well read (if sometimes critical), “Dear Siri, I’m In Love Again” critique. It will be interesting to see how Siri scores in tests like the one mentioned here following its iOS 6 update. Siri debuted on the iPhone 4S last fall. Later this year, it will expand to the new iPad and next iPhone. What's your beef with Siri? Source: AppleInsider 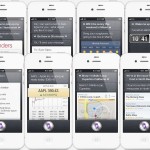 New Study Suggests Siri Is Still A Dingbat
Nothing found :(
Try something else