You are using an outdated browser. Please upgrade your browser to improve your experience.
by A.T. Faust III
June 29, 2012
Whenever analysts and market moguls and critics and pundits put Apple's staggering statistics to paper, they're usually all concerned with the basics. We've read about record market caps, record units sold, record revenue, and other record facts and figures, and it's all very impressive. But now, Goldman Sachs has put out the most impressive number yet: 295 billion. That's how much -- in dollars! -- that Apple's combined iPhone/iPad customer base is worth. For a little perspective, iDownloadBlog explains that

Even more amazingly, that $295 billion does not take into account Apple's $110 billion cash hoard, the value of the company's Mac line or iPod business, the projected 78-percent yearly adoption rate of iPad and iPhone, or any digital content like apps, music, movies, and shows. Subscription services, like iTunes Match -- are also excluded. So how much is Android's installed user base worth? If you believe Larry Page, not a whole lot. Wowee! Source: Fortune Via: iDownloadBlog 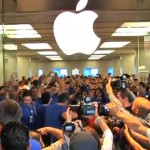