You are using an outdated browser. Please upgrade your browser to improve your experience.
by Bryan M. Wolfe
July 27, 2012
If Apple’s Cupertino campus was on fire, Jonathan Ive would be wise to bring with him the designs for the next generation iPhone, rather than those for the fourth-generation iPad. The reason: The handset is more valuable to the company’s bottom line than the iPad, according to Reuters. In court filings in the ongoing Samsung-Apple legal battle in California, Apple states the following:

Apple Inc earned gross margins of 49 to 58 percent for U.S. iPhone sales between April 2010 and the end of March 2012, while gross margins on the iPad were much lower during much of that period, according to a court filing… …Between October 2010 and the end of March 2012, Apple had gross margins of 23 to 32 percent on its U.S. iPad sales, which generated revenue of more than $13 billion for Apple, the filing said. Apple does not typically disclose profit margins on individual products.

In other words, Apple makes as much money on one iPhone as they do on two iPads. This information came ahead of Monday’s start of a trial between the two technology companies over patent issues. The case in U.S. District Court, Northern District of California, is Apple Inc v. Samsung Electronics Co Ltd et al, 11-1846. The sixth-generation iPhone is expected to arrive sometime in the next three months. Source: Reuters 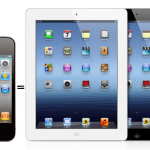 An iPhone In The Hand Is Worth Two iPads

An iPhone In The Hand Is Worth Two iPads
Nothing found :(
Try something else