You are using an outdated browser. Please upgrade your browser to improve your experience.
by A.T. Faust III
July 16, 2012
Apple's really been playing the controversy card with EPEAT of late. First, the company up and abandoned the certification system outright. Then, after a seeming cyclone of misinformed public outrage and critical question marks, Apple returned its products to the government-backed list of recycle-ready consumer tech. And how! Somehow, Apple's gone and given its newest MacBook Pro -- the very model that caused Cupertino to drop said environmental ratings standards in the first place -- an EPEAT Gold rating. Apparently, EPEAT itself doesn't conduct physical reviews before allowing products a place on its lists, so Apple took it upon itself to interpret the available guidelines and arrive at a score. Naturally, Mother Earth's various industry watchdogs are none too pleased, and most are calling for EPEAT to rescind Apple's allowance of EPEAT Gold. According to TUAW,

[a]lmost immediately, the Electronics TakeBack Coalition took offense with what had happened. Barbara Kyle, the National Coordinator for the ETBC said "We seriously doubt that these MacBooks should qualify for EPEAT at any level because we think they flunk two required criteria in the 'Design for End of Life' section of the standard." Those criteria include 4.3.1.3, which states that "External enclosures shall be easily removable by one person alone with commonly available tools" and 4.3.1.5, regarding "Identification and removal of components containing hazardous materials."

Of course, just like the first time around, folks are bound to jump to conclusions. Just remember that, when it comes to environmental standards compliance, Apple knows what's up. Likelier than not, Cook and company negotiated with EPEAT to establish a looser interpretation of the strict and staid (and aging) EPEAT standards in question. As design evolves ever tighter tolerances, it probably needed to happen anyway. Source: Fortune Via: TUAW 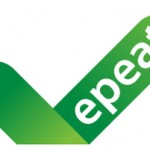 Apple EPEAT Controversy Its Most Recyclable Product Ever

Apple EPEAT Controversy Its Most Recyclable Product Ever
Nothing found :(
Try something else