You are using an outdated browser. Please upgrade your browser to improve your experience.
by Bryan M. Wolfe
July 19, 2012
Folks in Australia, Canada, Colombia, Ireland, New Zealand, and the United Kingdom now can use iTunes in the Cloud for movies. This news was first published by 9to5Mac and has yet to be confirmed by Apple. Originally only available in the U.S., iTunes in the Cloud for movies allows users to download previously purchased media to their PC, Mac, or iDevice.

iTunes UK now stores movies in the cloud! (at least some of them, anyhow) #awesome

This news follows the launch of iTunes Match for the first time in Poland and Hungary. It should be noted that Apple has yet to update their iTunes in the Cloud and iTunes Match Availability page to reflect these changes. If you're a reader living in one of the previously mentioned countries, please confirm that iTunes in the Cloud for movies is, in fact, now available there. Source: 9to5Mac 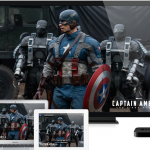 Apple Introduces iTunes In The Cloud For Movies In Six More Countries
Nothing found :(
Try something else