You are using an outdated browser. Please upgrade your browser to improve your experience.
by Bryan M. Wolfe
July 10, 2012
All the talk in recent days has been focused on the likely arrival of an iPad “mini” this fall. However, the company’s original iPod mini could also make news in the coming weeks. According to the Japanese blog Macotakara, Apple is expected to unveil a revamped iPod nano later this year. First launched in 2005 to replace the iPod mini, the iPod nano has been updated six times since then. According to the report, the seventh-generation iPod nano will look a lot like the iPod touch, but it would be smaller. In addition, the rumored device will include a rectangular screen and a home button similar to what you see on other iDevices. In addition, the new model could include a custom operating system and “dedicated new iTunes service.” Personally, I'm not feeling much love for the design concept shown above. Not only does the model look too boxy for my tastes, but it also looks significantly different than any other Apple product on the market today. Hopefully, the concept photo is wrong! Do you like the look of the rumored new iPod nano? Source: Macotakara Via: MacRumors 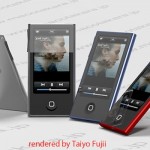 Apple Might Introduce A New iPod nano This Fall

Apple Might Introduce A New iPod nano This Fall
Nothing found :(
Try something else