You are using an outdated browser. Please upgrade your browser to improve your experience.
by Tommy Ly
July 13, 2012
Showtime's "Dexter" made his dark presence known on iOS in Dexter the Game HD, which hit the App Store in 2009. Now, in line with the show's seventh season, Dexter the Game 2 is slated for a fall release on Android and iOS. Dread Central has obtained part of the game's press release following its unveiling at this year's Comic-Con. From the press release:

Developed internally at Ecko|Code in conjunction with SHOWTIME, Dexter The Game 2 puts players in the shoes of America’s favoritevigilante in an open-world Miami. Dexter navigates the city in his own signature style. Crime scenes will be investigated with the knowledge that the serial killers who have evaded Miami’s Police Department will be stalked and given their comeuppance by Dexter's Dark Passenger. Series star and executive producer Michael C. Hall has provided the voice of Dexter Morgan and has been a close collaborator in the game’s development.

According to the press release, fans were dissatisfied with the length of Dexter the Game HD. Developer Ecko has responded by making Dexter the Game 2 an endless game. That is, new killers and cases are procedurally created, providing endless replay value. Other details are scarce at the moment, but the game's trailer reveals similar gameplay to its predecessor: Judging from the trailer, I'd say the game is unfinished. The graphics look like they've taken several steps back from the first Dexter game. Hopefully that'll change when the game gets closer to launch this fall. As always, we'll keep you posted, but how do you think the game looks so far? Source: Showtime Via: Dread Central 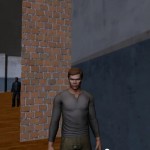 Dexter The Game 2 Coming To iOS This Fall
Nothing found :(
Try something else