You are using an outdated browser. Please upgrade your browser to improve your experience.
by Bryan M. Wolfe
July 31, 2012
In an alternative 2012, the Palm Pre IV is the most popular consumer phone on the planet. At the White House, President Obama carries around his secure BlackBerry, which he wishes had a larger screen, like an electric tablet would. In Redmond, Washington, Windows Vista II is being prepped for its debut. Soon, Microsoft’s latest OS will be installed on 95 percent of desktops and laptops around the world, with that iPod company in Cupertino, California taking the rest. This scary timeline could have been reality had Apple scrapped plans for the first iPhone. And this almost happened “multiple times” according to Apple guru Jonathan Ive speaking to The Telegraph. According to Apple's senior vice president of industrial design, Apple was very close to canceling plans to enter the smartphone market.

We nearly shelved the phone because we thought there were fundamental problems that we can't solve. With the early prototypes, I held the phone to my ear and my ear [would] dial the number. You have to detect all sorts of ear-shapes and chin shapes, skin color and hairdo...that was one of just many examples where we really thought, perhaps this isn’t going to work.

Luckily, Apple got it right and introduced the world to the iPhone in January 2007. The rest, as they say, is history. The iPhone became one of the best-selling smartphones on the planet and because of it, the first iPad was introduced in 2010. The introduction of iOS forced Google to develop Android; combined, both companies contributed to the decline of BlackBerry and to the end of Palm. Finally, without the iPhone, Apple’s OS X would probably still be trailing Microsoft’s Windows by large numbers. Instead, the combination of iOS and OS X could soon overtake Windows worldwide. All this because of the iPhone, which will be refreshed for a sixth time come September. Not bad for the iPod company, huh? Via: The Telegraph Photo: Alternative universe from "Fringe," io9 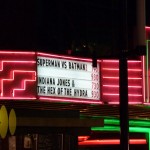 Imagine A World Without The iPhone

Imagine A World Without The iPhone
Nothing found :(
Try something else