You are using an outdated browser. Please upgrade your browser to improve your experience.
by Bryan M. Wolfe
July 3, 2012
What will Apple do now that Google has unveiled their spanking new Nexus 7 tablet? Release an iPad “mini,” of course, according to My Drivers. According to those “oh-so-reliable” sources, Apple is expected to take the cover off their long-rumored smaller iPad model later this year. When they do, the new tablet will be priced at between $249 and $299. The new model, again according to unnamed industry sources, will feature a 7.85-inch IGZO LCD display manufactured by Sharp and support for up to 330 pixels per inch. In other words, the iPad “mini” would likely come with a Retina display.

We’ve heard quite a few iPad “mini” rumors in recent months. Each time a new story sprouts up, our readers have responded – both for and against the idea of Apple releasing a shrunken iPad. One camp can’t wait for Apple to pull the trigger and compete directly with Amazon (and now Google) in the smaller tablet market. Others like to remind us what Steve Jobs once said about tinier tablets. In October 2010, the late Apple CEO famously said that a 10-inch screen was the minimum size required to create great tablet apps. It should be noted that these “for and against” discussions are also happening here at AppAdvice. While some of us love the idea of Apple launching an iPad “mini,” others absolutely hate the idea. In fact, some of us have a friendly wager on whether or not Apple releases a smaller iPad before the end of the year.

Which side will ultimately prevail?

I believe the rumors. In fact, I’m pretty sure Apple has been working on the iPad “mini” for a while now – and yes, even when Jobs was alive. The reason being is that Apple does not want to cede even a small piece of the overall tablet market to anyone else – especially to Amazon, Google, or Microsoft. The launch later this month of Google’s $199 Nexus 7 almost guarantees the iPad “mini” will launch this fall along with the arrival of the sixth-generation iPhone. When the iPad “mini” launches, expect the Nexus 7 to look like an afterthought. And Amazon's upcoming Kindle Fire refresh? Yeah, that too will feel like yesterday's news. Where do you stand? Would you buy an iPad “mini” and at what price point? Source: My Drivers Via: Unwired View Photo: iPad mini concept by iMore.com 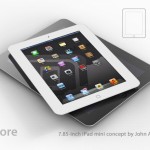 Launch Of Google's Nexus 7 Tablet All But Guarantees Apple Will Unveil An iPad 'mini' This Fall
Nothing found :(
Try something else