You are using an outdated browser. Please upgrade your browser to improve your experience.
by A.T. Faust III
July 22, 2012
Two App Store scams in one day? Unfortunately, that's the way it seems to be going lately. AppAdvice reader Niall has the dirty lowdown on this latest bit of low-down dirt:

I just bought Terraria from the AppStore, thinking I was getting THE 'Terraria' released for iOS (iPhone); but SURPRISE: it features a dumb, crudely programmed rip-off of Super Meat Boy look alike, called Cheese Man.

While an app about a Cheese Man sounds pretty awesome, this official-logo-using Terraria ripoff sure ain't it. Developed by the It Sons, who also sell "The Flintstones" and a MineCraft scam called "Craftboy" (and who are clearly missing a couple of letters to start their company name), the title's as far from a legitimate version of Terraria as you're likely to find. Heck, it's not even worthy of "homage" status. Hopefully, an iOS version of the real Terraria will arrive one day. However, that launch would assuredly be a very big deal, so until we tell you about it, just assume that anything on the App Store bearing said specific moniker is completely illegitimate. Meanwhile, any affected customers should report the problem to Apple for a full refund. 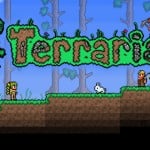