You are using an outdated browser. Please upgrade your browser to improve your experience.
by A.T. Faust III
July 5, 2012
On this blustery Fourth of July, most Americans are hard at leisure celebrating their country's precious independence. Fitting, then, that on this same day, it comes to light that Nokia's disastrous decision to bring in Stephen Elop as CEO was directly tied to the brand's own desire for (and vision of) freedom. The hire -- along with Elop's controversial switch to the Windows Phone OS -- was done, says industry bigwig Jean-Louis Gassée, out of Nokia's fear of "losing control over their destiny." In an interview with Computing, Gassée -- a former Apple executive and respected Silicon Valley investor -- says he strongly encourages the Nokia board to fire Elop (and fire themselves, too):

I think that Elop will have to go, but I also think that the board also needs to be renewed with people who have an understanding and working knowledge of the mobile industry.

Further, while Gassée advised Nokia to drop its Symbian and Meego platforms some two years ago, he certainly wasn't telling the company to pursue a Microsoft partnership. Says the guru,

I told them to drop everything and go Android. Do it in secret and let the rumours fly. ... I would have used Nokia’s design flare to make very nice phones. I would integrate Ovi into Android and people would say that Nokia sided with the winner. It would have been tough fighting Samsung, though, because Samsung takes no prisoners. They don’t brush their teeth in the morning – they file them.

Still, if any hardware manufacturer (besides Apple) was equipped to go toe-to-toe with Samsung, it was Nokia. They had -- and still have -- the history, pedigree, and expertise to bring well-crafted, attractive handsets to market. Plus, as iDownloadBlog explains, Nokia could've benefited immediately from Google's popular platform:

Android’s popularity, maturity and Google’s backing coupled with Nokia’s reach, brand recognition and manufacturing capabilities would have enabled Nokia to quickly hit the ground running again instead of having to jump off the burning platform into the cold waters.

But maybe it's not too late for Nokia to swim ashore, dry off, and go the Android route. As reported by CNET, the Finnish company already has a so-called Plan B in place. And if what former Nokia executive Tomi Ahonen says is true, that Elop "secretly serves as Microsoft’s Trojan horse tasked with devaluing the once great cell phone giant so that Redmond could buy it for peanuts and become a handset maker," then Nokia must act fast. Should Microsoft's clandestine Surface tablet initiative be any indication of the company's plans for its handset future, Nokia had better be all in or all out. If they still value the freedom to control their own destiny, they'll choose the latter. Source: Computing Via: iDownloadBlog 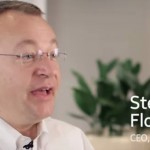