You are using an outdated browser. Please upgrade your browser to improve your experience.
by A.T. Faust III
July 24, 2012
Oh, Portugal. Just a week after the country's consumer protection watchdog announced plans to take Apple to court over the wording of its advertised Apple Care add-ons (à la Italy), the Cupertino company faces an equally idiotic lawsuit from regional reseller Taboada and Barros. That outfit, whose Apple-selling Interlog distribution company went out of business earlier this year, alleges that "price fixing" and "unfair trade practices" led to the subsidiary's untimely demise. Chief among the complaints is that Apple intentionally controlled the amount of iPads and other iDevices it sold to Interlog. The outrage! The unmitigated gall! I suppose, in Taboada and Barros' kooky vision of supply and demand, products are just slung about from the home office with no limit on allotment and no strategy to evenly distribute stock elsewhere around the world. It seems like the reseller simply expected an endless flow of goods from Apple and then failed when it couldn't get enough product to meet its poorly-handled pre-sales. Additionally, the company is upset that Apple altered its reseller margins before the new, more-expensive-to-manufacture iPad launched. Reports TechCrunch:

A source at [Taboada and Barros], speaking to [Portuguese newspaper] Sol, says that on top of restricting the flow of products to third parties, Apple renegotiated the margins that resellers can take on products down to 4 percent from a previous 12 percent. “Apple unilaterally established products, prices and quantities to be sold to large retailers,” it said.

Never mind that Taboada and Barros themselves use the word "negotiated" or the fact that, somehow, the above quote's last bit is being portrayed as anything other than good, common business sense. Never mind that Apple has always exercised precise control over the who, what, where, when, why, and how of its supply chain. Never mind that these lawsuit-happy defectives won't take responsibility for running their own business into the ground. Never mind that other Portuguese Apple resellers are doing just fine. "Never mind all that," says Toboada and Barros. "Let's just sue Apple for $49 million." Good luck. Source: TechCrunch Image: Phone Arena 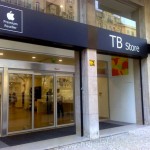