You are using an outdated browser. Please upgrade your browser to improve your experience.
by A.T. Faust III
July 7, 2012
Well, we told you it wouldn't last long. Yesterday, the U.S. Court of Appeals for the Federal Circuit listened to and granted Samsung's request for a temporary stay on the just-ordered Galaxy Nexus injunction. That means that U.S. customers will be able to buy the flagship Android handset until at least early next week when Apple's legal team is expected to argue against the merits of the stay. (The Cupertino lawyers actually have until July 12 to submit any response, but it's in their best interest to expedite the process as much as possible.) Barring any successful counterclaims on Apple's part (like the fact that the company's already posted a $96 million bond to protect wrongly impacted Galaxy Nexus sales and that Google and Samsung are prepared to roll out a simple software fix that acknowledges and removes any contested patent infringment), Samsung could earn the right to sell its Galaxy Nexus handset throughout the entire preliminary injunction appeal. And who knows, maybe the whole case will eventually be overturned. After all, Samsung could get lucky and have this guy on the bench. Source: FOSS Patents 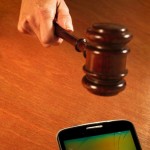 Preliminary Injunction On Samsung Galaxy Nexus Temporarily Stayed
Nothing found :(
Try something else