You are using an outdated browser. Please upgrade your browser to improve your experience.
by Tommy Ly
July 5, 2012
Well, this is an ambitious little accessory, isn't it? Say hello to the iMpulse, which is essentially a cross between the iCade Mobile and the Hone Kickstarter project. That is, it's a gaming controller, as well as a locator for your keys (or anything else you leave it attached to). The iMpulse connects to your iDevice via Bluetooth and features a rechargeable battery that is large enough for "long play sessions and extended sleep mode." For gaming, the iMpulse features four buttons and a gliding thumbstick (like the one on the Nintendo 3DS) to play over 100 compatible games. Sound familiar? The iMplulse is compatible with the same games as the iCade. Maybe they used the iCade's SDK? When you aren't gaming, the iMpulse can be used as a tracker of sorts. Simply activate its free companion app, hit the Locate button, and if your iMpulse is within range (about 100 feet), it'll start chirping. That's just icing on the cake for me. The iMpulse won't be available until the end of the year, but the company is now accepting pre-orders for just $19.99. Compare that to the $70 iCade Mobile and $50 Hone and the iMpulse is practically a steal. Since it uses Bluetooth and doesn't need to physically connect to your iDevice, the iMpulse should be compatible with the next generation iPhone as well. I'm pretty excited about the iMpluse. It's simple, practical, and best of all, cheap. Will you be pre-ordering an iMpulse? 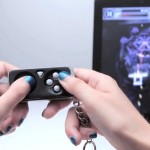 The iMpulse Controller Is The Little Bluetooth Accessory That Could
Nothing found :(
Try something else