You are using an outdated browser. Please upgrade your browser to improve your experience.
by Bryan M. Wolfe
August 24, 2012
Just how bad were Apple’s recently pulled “Genius” ads? So bad that the director behind the ads has quit, according to AdAge. Scott Trattner, executive creator at TBWA/Media Arts Lab for more than a decade has left the company to take a similar position at 72andSunny. Trattner, best known as the guy behind Apple's popular “Get a Mac” campaign, also created the heavily panned “Genius” television ads that began airing during this month’s Summer Olympic Games, but were soon pulled off the air. Earlier this week, the ads were officially pulled from Apple’s marketing page, and YouTube channel. At 72andSunny, Trattner will be working with Jason Norcross and Frank Hahn to produce advertising for K-Swiss, Target, Activision, and Carl’s Junior/Hardee’s. Take a look at some of the best ads Trattner helped create: Now that the "Genius" ads are gone, what type of ads should Apple promote? Source: AdAge Photo: Trattner and a "Get a Mac" ad 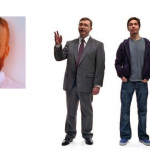 'Genius' Ad Director Quits, Goes From Selling Apple Products To Hamburgers
Nothing found :(
Try something else